The times have certainly changed, but as much as this craziness has forced us to adapt, it’s also made us appreciate things we’ve long forgotten. Sweats have taken on a new meaning, relationships might have more than its usual ups and downs, and we long for activities we haven’t done in months.

It’s also no secret that we are all jonesing for an excuse to leave our houses and apartments, while also continuing to practice social distancing, mitigating the spread of this pandemic. So, what exactly am I getting at? Enter the Drive-in Theater—or should I say, re-enter? 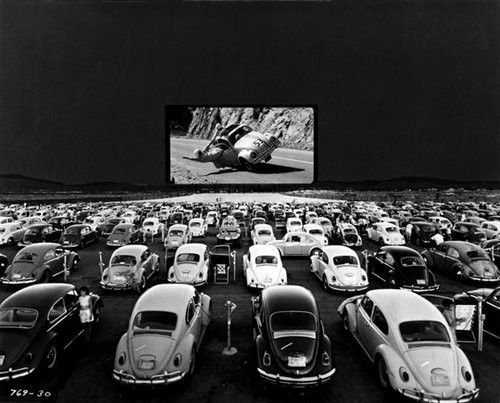 Not very long ago, the drive-in movie theater littered the states, serving as a premium choice for a date night, or much needed bonding time. With their capacity to offer entertainment outside of your living room, while creating a distance from questionably sanitary strangers, they offered a phenomenal respite from the couch. Yes, you’ll still be sitting, but you can drop the windows down, and get some fresh air outside of your block’s radius!

We’ve rounded up some of the drive-ins that will be opening in or near NYC (if they haven’t already):

I know what you’re thinking, and despite the name, Bel Aire Diner in Astoria, Queens has set up an open-air drive-in theater in their driveway. They update their schedule regularly on Instagram, with classic options like their recent showing of The Sandlot, and have put in a number of safety measures to help you maintain your health in today’s current climate. Tickets are $32 per a car, at a minimum of 2 people.

In addition to their screenings,  you can order food from the diner to your car through their website, simply by adding your car color and license plate number, and they’ll bring it right to you. I don’t know about you, but nothing sounds better than digging into a pile of fresh blueberry pancakes while watching a movie that feels more like I’m in the theater itself. What could be better?!

This one is a little outside the city (about an hour to be exact), in Warwick, New York. They have been around for several decades, passing hands from owner to owner and have just re-opened thanks to the new policies in place. Warwick also has its own set of COVID-19 safety rules, including maximums for those visiting the concession stand (though they have the option to order through an app) and rules for masks when in and outside of your car.

Their movie options are more contemporary, and standard to recent releases, so if you’re looking for less retro and more modern, this is a better option. Tickets are $12 for adults and $8 for children and seniors. 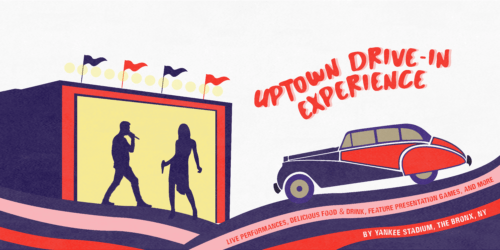 That’s right! The Bronx staple that houses one of the two New York’s MLB teams (we won’t get into favorites) is lending their parking lot to a summer entertainment festival they’re calling the Uptown Drive-In Experience. Put together by MASC Hospitality Group, the same guys behind the Bronx Night Market, and the Bronx Beer Festival. Starting in July and running through August, the stadium will play host to dinner service (in your car), live music, drive-in movies, games, raffles, and more.

The team has been working since March to source vendors and create an “elevated” experience for guests to utilize, as a way to get out of their houses and back into society safely. No details are out on where to buy tickets or who their partners are yet, but we do know tickets will be priced by car and you can sign up for updates here. 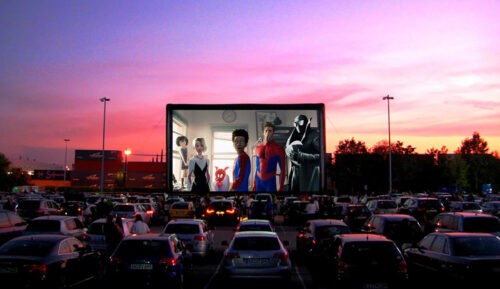 Yet to open, this option is definitely one to keep an eye out for. The Drive-in Cinema Club is brought to you by their partners at Hot Tub Cinema (who knew that was a thing?) as a safer alternative to the popular summer series, which will likely be unable to move ahead this year for obvious reasons.

Location TBD, but it will in NYC! You can pre-register here for now and they’ll send more information as tickets are available, and the movies announced. UPDATE: This drive-in theater is now on hold.

💥Coming soon💥 We're teaming up with @imax and @att for a drive-in experience you won't want to miss. A curated selection of films, music, and sports programming coming to drive-ins and venues near you this summer. Head to the link in our bio for more details.

The Tribeca Drive-In is put together the last couple of years by the team that handles the Tribeca Film Festival, which was unfortunately postponed this April. This being said, we are positive it will not only be amazing but also filled with surprises and likely some pre-released features. Set to kick-off on July 9th, and tickets going on sale June 22nd, there are no details on where or what they will be showing just yet, beyond the promise of a curated selection of new, classic, and independent films, as well as special music and sports events.

IMAX is also being tagged in to help with the initiative, and the Tribeca team will utilize its digital re-mastering process to enrich the image and sound of programming. They are also involved in the curation of the program, drawing from its library of IMAX content, so no need to fear a possible dud of a schedule. Concession-lovers, fear not, as for each event, Tribeca has promised to work with local vendors, while supporting small businesses and creating an experience truly unique to each community. Keep an ear out for individual event vendor announcements.

Fair Oaks is located about an hour and 30 minutes outside of NYC and is pegged as an “old-fashioned seasonal drive-in movie theater with two screens showing current selections.” Since, at the moment, there aren’t many current selections playing, they are currently alternating showings on their two screens with one playing “Monty Python and the Holy Grail” and “Airplane” on alternating nights, and the other alternating between “Willy Wonka and the Chocolate Factory” and “The Wizard of Oz”. And they have plans to switch one screen to the recently released “Pete Davidson in The King of Staten Island” and “The Breakfast Club” & (on Screen 2) “Harry Potter and the Sorcerer’s Stone” (6/12).

A single car will cost you $20 (about the price of your average IMAX ticket), but they also offer a $40 package which includes admission for your car, a 170-ounce popcorn, (4) 20 oz beverages & your choice of candy.

A new addition, Skyline is located up close and personal, making it ideal for those who want a drive-in without too much actual driving to get there. Located at 1 Oak Drive along the East River, the theater offers some old school classics like “Ferris Bueller’s Day Off” and “Footloose”.

This is NYC, so pricing is a bit higher than other venues, with ticket pricing ranges by car size/passengers per the below:

They boast a selection on on-site food trucks for food and are open Fridays and Saturdays (aka your next date night). The exciting part about this one is that they also have plans for when the sanctions of distancing are lifted. Walk-ins will be welcomed in the ensuing weeks, with outdoor seating options, so you can drop in enjoy the movies even if you don’t own a car.

As you can see, drive-ins are decidedly coming back in big ways, so if we were you, we’d snag our tickets to some of these while they’re hot and available.

5 Home Cleaning Brands to Try, With the Environment and Your Health in Mind Small Business Innovation in NYC: Superfine!

Today is the First Day of Summer Y'all!☀️🍸