Better Your Summer With This Spanish Tapas and Cocktail Series

Founder at NYC Plugged
Nothing feeds the soul like the best of music, art and food. A New Yorker by heart, scoping out all the awesomeness of this big ol' city.

Last Thursday, we joined HH Bespoke Spirits, the family owned and operated spirit collection by family behind Harlem Haberdashery and Modern Spanish Tapas restaurant GAUDir, as they announced the launch of their Summer Cocktail and Food Pairing Series.

Located in East Harlem at on E110th Street and 2nd Avenue, those who are familiar with the area, might remember the space as being Mountainbird, a French American eatery owned by High End catering group, Tastings, founded back in 2001. GAUDir, also being a subsidiary of Tastings has called East Harlem home, since 2013. GAUDir, as you might be wondering, comes from the Catalan, word for ‘enjoy’. It also refers to the famous architect Gaudi, who largely influenced the landscape of the city of Barcelona in the region of Catalonia. GAUDir, which first started as a popup in the same location for a year, became permanent, catering to Upper East Side and Harlem cliente alike.

GAUDir’s Executive Chef, Chef Cedric Durand, comes from the Southwestwern town of France, Toulouse. With his mother being Spanish, and his father, French, he spent alot of his childhood back and forth between the two countries. Spending summers with grandparents in Spain, and with his parents in France; this influenced his cuisine greatly. With these experiences, Chef Durand takes traditional dishes and transforms them into something that’s his, sometimes using less or more of a certain ingredient. This, when paired with a Michelin star background, can only produce dishes which are a symphony for your taste buds.

Tastings and GAUDir owner, Alexandra Morris, who grew up in New York City, created and worked in catering for François Payard, where she met then pastry chef, Chef Durand. Fast forward to today, and they now have the hidden gem we call GAUDir.

GAUDir’s menu focuses on authentic Spanish style tapas, introducing a format which brings people together socially, while creating a sense of community. With shareable dishes, and ingredients staying true to Spanish culture, you are definitely in for a treat when dining with a group of 2 or more! We enjoyed a few dishes from the menu including Croquetas Cremosas, 6 creamy croquettes, half filled with chorizo and the other with ham. Papatas Bravas, crispy potatoes with salsa brava on the bottom and Allioli, the Spanish version of the French garlic sauce aioli, ladled on top. Pimentos de Padrón, Shishito Peppers, with a sprinkle of coarse sea salt. Lastly the Gambas al Ajillo, Shrimp, served in a guindilla pepper and olive oil sauce. The flavors were spot on while, adding hints of big Spanish flavor. We’ve heard they have a pretty awesome Sunday brunch as well.

Harlem Haberdashery is a bespoke boutique, located in Central Harlem, and the retail expression of 5001 FLAVORS, a custom made apparel company creating looks for celebrities, recording artists and sports stars for over 20 years. It’s inspiration is drawn from the distinctive style and rich cultural history of the Harlem Renaissance, while adding in designs made for the present and the future.

The Summer Series they are launching with GAUDir, will happen every Thursday during the summer months of July and August, from 6-8pm. Each week will feature a different theme, which draws from the culinary influence of Spain, while tying in Harlem’s noted culture. Gin was the chosen spirit for the series, because it pairs so well with the flavors of Spanish cuisine. To find out which pairing will be hitting their menu for the week, keep an eye on GAUDir’s Instagram feed.

HH Bespoke Spirits Bespoke Gin is a new twist on a traditional London Dry style gin. Close your eyes, and think juniper flavors, balanced by the infusion of lavender, rose hip, beach plum and cranberry. It mixes well with additions as simple as tonic water, to flavors on the bitter or sweeter side.

The two cocktails we had the pleasure of tasting that evening was the Sandía, made with HH Bespoke Gin, Aperol, Watermelon Juice, Lemon Juice, Syrup, and Club Soda. The El Remedio, was made with HH Bespoke Gin, Lemon and Honey. You can probably see why its called ‘The Remedy’. Both cocktails were very refreshing, and a perfect addition to a summer evening, or any time of a summer day really!

If you read this and thought, well I am not much of a gin person, don’t fear! HH Bespoke offers other spirits like vodka, which is handmade in small batches using locally grown corn. Also a rum, which is aged in New American Oak and then onc-used Bourbon barrels. You can find any of their spirits at these locations. Not sure what to make? You can also view cocktail ideas here, for your hosting nights.

“Let Your Evening Be Gin”

Gaudir also has ‘Harlem Summer Nights, where with the purchase of one HH Bespoke Gin Cocktail, you will receive one plate of complimentary tapas! 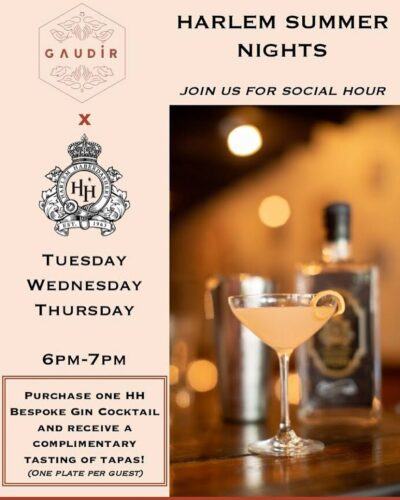 Thirsty Tuesday Anyone? 🍸 It's only Tuesday, but we can probably use a nice summer cocktail, a cooling one at that!☀️ . Be sure to check the newly launched @ts_gaudir located in East Harlem x @hhbespokespirit Summer Series. . Running from July- August on Thursdays, each week features a different dish paired with a cocktail.The weekly themes are influenced by Spain, while tying into Harlem's culture. . You can indulge in Spanish tapas and refreshing gin cocktails pairings from 6pm-close. Starts next Thursday, due to the 4th of July. . Find out what's in store each week via @ts_gaudir's Instagram and/or website. . . Keep an 👀 out for our blog post, which delves a bit deeper into this wonderful collaboration! . . 📸 El Remedio HH Bespoke Gin, Lemon, Honey . . . . . . . #nycplugged #hhbespoke #hhbespokespirits #harlemhaberdashery #gin #tapas #spain #gaudir #eastharlem #NYC #summer #summercocktail #thirsty #thirstynyc #draaaaanks #cocktails #cocktail #mixology #mixologist #happyhour #liqpic #yelpeatsnyc #timeoutnewyork #eaterny #zipkick #zagatnyc #infatuationnyc #bestfoodny #seeyourcity #nycgo

Nothing feeds the soul like the best of music, art and food. A New Yorker by heart, scoping out all the awesomeness of this big ol' city.
Come Play with Us at POPSUGAR Play/Ground Bonnie Halper x Grit Daily News x Troy Liquor Bar- Thursday July 11th

PUT ON YOUR DANCING SHOES!

Since today is practically Thursday 😈.... What

New Jewish Cuisine from Buenos Aires 🍴 . We had

Have Yourself a Merry a Little Christmas 🎄 . It

A French Affair 💋 "The Best Kisses are French K

Dig into THIS Extraordinary Eggs and Rice dish, th