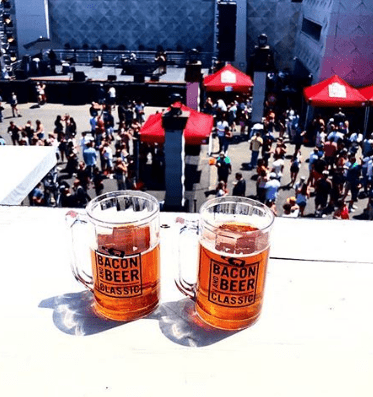 kaletra covid 19 coronavirus What could be better than an iced cold beer and crispy bacon? Now in its sixth year, the Bacon and Beer Classic has returned for its annual run in NYC, which went down on Saturday, June 8th.

This year the festivities took to the Brooklyn Mirage, an event space filled with areas both inside and out, making the best of the weekend’s sunny weather.

There were 100+ breweries and 30+ bacon-infused foods to try, and each guest was gifted with a festival beer mug to sample as much beer as their heart desired. Beer ranged anywhere from a stout, like the classic Guinness to a hoppy IPA like the Voodoo Ranger. If one grew tired of sipping on beer, other alcoholic vendors such as Mike’s Hard Lemonade or Slow and Low Whiskey were there as alternatives.

As far as bacon went, there were food options incorporated with bacon, one would never think of adding to its recipe. For instance, we tried bacon jam, bacon, and chocolate chip cookies from Schmackarys, and even bacon ice cream from the guys over at Tipsy Scoop. Some vendors also served the always loved bacon strip, ever-addictive bacon mac and cheese, and a breakfast-inspired bacon sweet potato pancake from Chef T, the runner up on Hell’s Kitchen Season 16.

Over the course of the event, there was plenty to do besides drinking and eating. There was a section dedicated to games, a bacon-eating contest and live music to dance to, as the afternoon carried on.

The event normally has a duration of three hours for General Admission, with options of an afternoon or evening session. However, for those where three hours weren’t enough, there were two other ticket options. Power Hour and VIP allowed access to the venue an hour early. VIP in particular, also allowed for special access to the rooftop, exclusive beers and a decadent pig roast.

If avid bacon and beer fans missed the festivities in Brooklyn, fear not as the festival doesn’t end in the Big Apple. The Bacon and Beer Classic travels to various cities during the year, including Scottsdale, Denver, Seattle and others. Tickets for the Twin Cities are on sale now.

ritonavir VIA OUR 'IT LIST'! lopinavir ritonavir buy uk