Founder at NYC Plugged
Nothing feeds the soul like the best of music, art and food. A New Yorker by heart, scoping out all the awesomeness of this big ol' city.

Last week LG took us on a journey throughout the 5 Boroughs, for 5 Nights, while experiencing 5 different Views. The new LG V40 ThinQ flagship smartphone, which just dropped last Friday, has 5 cameras built in, which makes it’s photo taking possibilities even more endless.

The week started off with a cruise on the Hudson River to Staten Island and back, with the good ol’ folks from Hornblower Cruises, while taking in the captivating views of New York, when illuminated at night. The second night we explored the New York Botanical Gardens in The Bronx, where James Beard Award-Winning Chef Jonathan Waxman, gave us a live cooking demo and bites of his delectable creations. 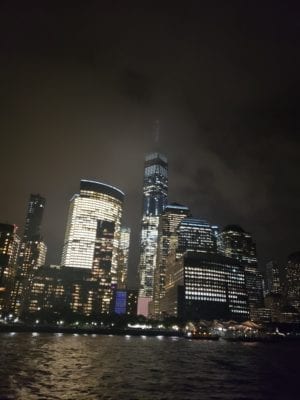 Wednesday we got artsy at the creative Paper Factory Hotel, where Queens native OG Millie painted live on her vintage mirror canvas, which a lucky guest also got to take home. Thursday night, things got nostalgic, as we viewed NYC Cult Classic Ghostbusters on rooftop of 64 Dobbin Street, while gobbling down classic movie watching treats.

Friday closed out the week right, with a live performance by Grammy-nominated hip hop artist French Montana and surprise special guest Becky G, at Stage 48 in Manhattan, which was the liveliest night in my opinion. All four floors were taken over while French played an hour long set including his newest hit single “No Stylist” featuring Drake.

During all 5 nights, we also got the chance to test out the new phone, all the while snapping Instagram worthy photos in backdrops recreating various New York City moments, sipping on cocktails from premium bars, and nibbling on passed bites. The music was taken care of by with DJ sets by DJ Hesta Prynn and DJ Taela Naomi in rotating nights.

Here’s a rundown of some of the Camera Effects included as well:
3D LIGHT EFFECT
Choose from 5 studio-like lighting effects to brighten, contour or add drama to your portraits. Includes Natural, Softbox, Contour, Stage and Stage Black & White.

PORTRAIT
Add a professional touch – in real time or after the shot is taken – by artfully blurring the background so that you stand out.

BACKDROP
Choose from a variety of colored backgrounds to make your pictures pop.

CINE SHOT
Select and animate the parts of your photo that have movement to bring still images to life.

HIGH DYNAMIC RANGE
Elevate your photos with HDR and capture bright spots and dark shadows in the same frame, all in vivid detail.

AI CAM
Capture the perfect shot with a camera so clever, it knows exactly what you’re shooting by recognizing up to 19 subjects and recommending 4 optimized filter options.

AI COMPOSITION
The AI camera engine applies the rule of thirds to frame your picture and adjust your subject’s position for artistically balanced photos that draw the eye.

GOOGLE LENS
With the snap of a photo and AI integration, Google Lens identifies and provides instant, detailed information on real-life objects like artwork, landmarks, animals, and much more.

The real question is…will you be getting the new LG V40 ThinQ? Still thinking? Click here for more!

I’m sure you’ve also seen their new and hilarious commercial below, which shows off their portrait setting ?

Nothing feeds the soul like the best of music, art and food. A New Yorker by heart, scoping out all the awesomeness of this big ol' city.
Pandora Presents: Beyond 2018 w/ Cardi B, Julia Michaels and Danileigh- November 13th Grand Opening: The Upstairs- Wednesday October 31st

Spring May be Near, but 'Winter' is Still Here ❄