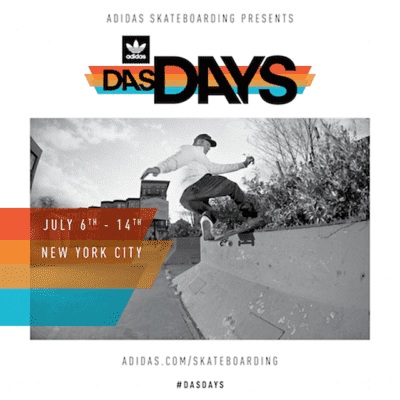 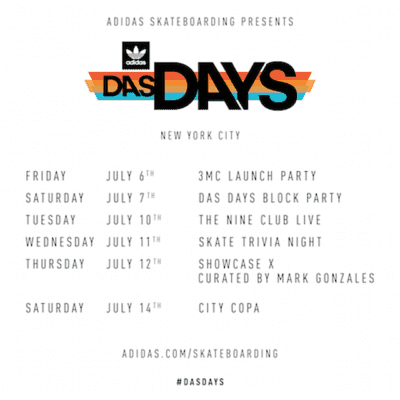 SATURDAY, JULY 7 | BLOCK PARTY, 5-11pm
The event series then heads into the weekend with a block party celebration at Terminal 5 (610 W 56th St.) in Hell’s Kitchen. Produced in partnership with Revolver Magazine, the party will see an open floor skate jam with cash prizes, live music concert with The Beach Fossils, NOTHING, Sheer Mag and Dark Thoughts along with the video premiere of 20 & 50, a new skate edit featuring the legendary Mark Gonzales and Tyshawn Jones.

WEDNESDAY, JULY 11 | SKATE TRIVIA BY USELESS WOODEN KNOWLEDGE, 7-10pm
Join Clint Peterson, Justin Strubing, Andreas Trolf, Daniel Shimizu and the rest of the Useless Wooden Trivia crew for an evening of brain busting skate trivia guaranteed to stump even the most seasoned of skate nerds. Taking place at the Epstein’s (82 Stanton St.) in LES, local skaters will be on hand including adidas team riders and more.

THURSDAY, JULY 12 | SHOWCASE X CURATED BY MARK GONZALES, invite only
Showcase X, part of adidas Skateboarding’s global creators series, The Showcase, is a community-driven group art exhibition and cultural gathering designed to provide a creative platform to showcase works from emerging artists and talent from in and around skateboarding. Curated by adidas’ own Mark Gonzales, Showcase X will take place at Milk Studios (450 W 15th St., #800) in Chelsea with a special surprise for guests.

SATURDAY, JULY 14 | CITY COPA, 2-7:30pm
As the latest iteration of the brand’s Skata Copa contests, City Copa, produced by Jenkem, in partnership with Labor and KCDC Skateshop, is calling all NY skateboarders. City Copa goes mobile with a spontaneous gathering that routes participants in critical mass fashion from Brooklyn to to the lower east side hitting cleverly designed spots along the way. The day concludes at Max Fish (120 Orchard St.) in LES.

Stay tuned to the adidas Skateboarding website and Instagram for more information on Das Days scheduling and more.