Our Take on @TucaandBertie at the @Tribeca Film Festival, How Original is It? 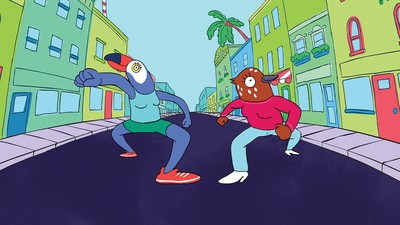 Synopsis:
Tuca & Bertie is an animated comedy series about the friendship between two 30-year-old bird women who live in the same apartment building. It features Tuca (Tiffany Haddish), a cocky, carefree toucan, and Bertie (Ali Wong), an anxious, daydreaming songbird. 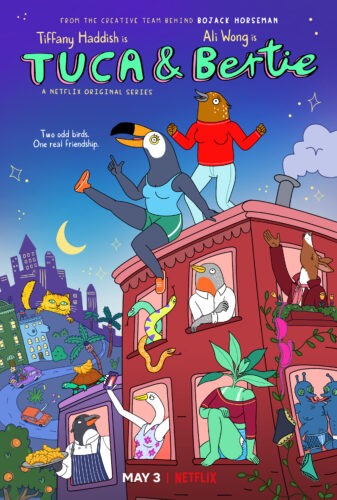 My Thoughts:
Tuca and Bertie, a new Netflix show that joined the platform on May 3rd, is a comedic animated show starring Tiffany Haddish and Ali Wong. The show was created and written by Lisa Hanawalt, who also the created Bojack Horseman, an animated show that has five seasons on Netflix and has been renewed for a sixth season. This is why both shows have the same art style. The loud and bubbly show starts off on a fun and energetic note, before delving into more serious topics. The quirky comedy about two female best friends was not exactly what I was expecting.

The show follows two 30 something year-old birds, who live in the city navigating their way through funny predicaments and mishaps. As the show continues they start dealing with serious topics such as sexual harassment, body image, anxiety, and sexual assault while also touching on topics such as substance abuse and dysfunctional familial relationships. The show starts out by establishing that Tuca and Bertie used to be roomates, but Tuca had to move out because Bertie moved in with her boyfriend Speckles, played by Steven Yeun.

I thought the show did an amazing job at introducing the characters. It was short, simple, and very funny. The voice acting is also a notable part of the show, with Tiffany Haddish stealing every scene she was in. Ali Wong’s acting as Bertie isn’t bad in any way, it just doesn’t compare to Tiffany’s impeccable comedic timing. As the show progressed, the plot continued to grow, ending with a very powerful message. I love animated shows but I have always hated that they feel like they have to ‘reset’ at the end of the episode. I was happy to see that Tuca and Bertie has a consecutive storyline where the plot continues throughout the entire season just like Bojack Horseman.

We also attended the Red Carpet for Tuca and Bertie, and I was able to talk to Adam Conover, star of Adam Ruins Everything. He is Lisa’s boyfriend and a voice actor on the show. He had a lot of insight on the shows creation and offered up some interesting information. Since most animated shows are created by comedy writers instead of animators, the animation itself isn’t as fun as it is in Tuca and Bertie. Instead of only focusing on jokes, Lisa Hanawalt is able to have a lot of funny gags and jokes told through the style and animation, and not just through the dialogue. After talking to Adam, I paid more attention to the animation style and saw how a lot of the humor came from the characters movements, the backgrounds, and the transition sequences. Overall my favorite part of the whole show is the opening theme song, which isn’t a good sign. While there were a lot of aspects to the series that were notable, it still fell short of my expectations for several reasons.

After watching the first two episodes it became very clear that this show does not take place in the same universe as Bojack Horseman even though the two shows look virtually identical. Tuca and Bertie has talking plants, talking animals, and normal house plants and animals. In Bojack the rules of the world are clear: all animals have human characteristics. In Tuca and Bertie it’s unclear at times what the rules of the world are, making the show harder to follow. I wish the show was drawn in a different style, since the two aren’t connected in any way. I do understand why the art was similar; I’m sure Netflix wanted to introduce the Bojack Horseman fan base to Tuca and Bertie so that they would have guaranteed viewers. But for me, I didn’t like how similar the shows looked because I couldn’t help but compare them the entire time I was watching.

The show changes a lot throughout the season, so judging it on the first two episodes wouldn’t be fair. That’s why I’m glad Netflix dropped the entire season so I was able to immediately watch it to completion. Overall, I wish the show was a little more consistent with it’s tone. It started out full of gags and reminded me a lot of Angie Tribeca. As it progressed however, it started to feel a little more like Bojack Horseman as they started deal with more serious issues. I found the music very loud and very lively compared to Bojacks often somber sounds. At times I thought the sound track was a little too much. It was filled with loud dance beats and EDM. There was also a big difference between watching something with a live audience vs. watching it alone at home. I loved watching the first two episodes when I was in a room full of people who were invested in the show with me. Laughter filled the room and I was more open to the jokes in the show. The loud music also felt more natural when played in a room of 100 people. Watching by myself at home on my couch had a very different feel.

My main concern about the show is the lack of originality. Not only is it identical to Bojack in style, but the plot and overall theme of the show feels likes its taking a little too much from the popular TV show Broad City. While Broad City is a live action show starring Abbi Jacobson and Ilana Glazer, it is about about a strong friendship between two women who live in NYC. One of Abbi’s defining characteristics is that she has lot of anxiety and Ilana often overpowers her at times by being the crazier character. That relationship is paralleled in Tuca and Bertie, with Tuca being the wild and crazy character, while Bertie is filled with anxiety. I also felt like the feminist issues being discussed were forced into the plot and didn’t flow naturally. A lot of shows recently have been covering these topics, and Tuca and Bertie doesn’t touch upon anything new fronts.

Since most people have Netflix (or steal it from a friend, sister or distant cousin), I do recommend checking it out to form your own opinion on the show. If you haven’t seen Bojack yet, you definitely should since it is far superior to Tuca and Bertie. It is also streaming on Netflix. One of my favorite lines from Tuca and Bertie: “Ka-kaaaw! That’s the alarm that sounds when no women have spoken out loud for three minutes.” The show has merit but it just didn’t live up to my expectations.