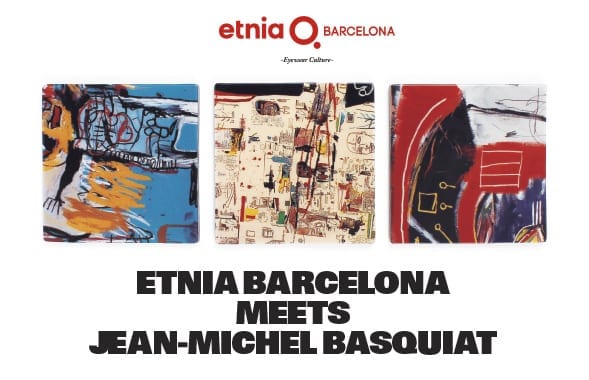 Last Thursday Etnia Barcelona, the company which combines art and eyewear ever so effortlessly, held their Launch Party in collaboration with Jean-Michel Basquiat at the Dumbo Loft.

As you stepped the room, you came upon three of the original works of Basquiat’s: Fallen Angel, Glenn, and In This Case. These same works are what also fed the design into the collection , which comes in four different styles taking from the three of Basquiat’s here  works.

The space was busy with people jamming to a DJ set by Lloydski, or throwing down their tags on the graffiti board.
While you made your way to the back, you found your self surrounded by a space adorned with candles, antique furniture, tubes and cans of paint, and copies of Basquiat’s artwork scattered around; representing somewhat of a homage to the one of a kind artist. This is where you also got the chance to check out the collection and try on it.

Mixed in the crowd was the who’s who in art, music and fashion. Know of someone by the name of Solange?

The party also had the chance to view the collection’s promo video featuring Graphic Artist Elle and Rapper and Music Producer Oddisee.

Cocktails with names like Soho Summer and Apple Basq were flowing compliments of SKYY Vodka, when Oddisee took the stage to rap some of his latest music, hyping up the crowd even more.

http://thevillagestyle.com/?kaletra=kaletra-price The collection is sold online in 20 locations around the world, in the case of NYC you can soon purchase them at the Whitney Museum of Contemporary Art and Saks Fifth Avenue. The retail price is $305, definitely worth the styling and artistry.

http://drnitalandry.com/?kaletra=lopinavir-ritonavir-dosis Check out photos from the party and collection below!

kaletra usa More About the Collection

Etnia Barcelona, which takes its inspiration from cultural movements, presents its new collection, an homage to artist Jean Michel Basquiat.

Etnia Barcelona, having built its story through the cooperation with myths in the worlds of art and photography, takes on the maximum expression of the world of graffiti and street art with this collection, which also includes references to jazz, rap, punk, pop culture, and comics.

Transferring them to an exclusive collection of sunglasses made up of four models displaying patterns constructed based on three original works by the artist that make each of the models in this capsule a unique piece, differentiated from the others, with a common denominator consisting of three vertices recalling the three points of his iconic crown, his artistic legacy.

Like the works of Basquiat, this collection transmits the transgressive, powerful,and emotional aspects of his work that made the artist one of the most important figures in the culture and art of today.

Basquiat’s work transmits the language and symbolism of the street; images that pay tribute to royalty, heroism, and the street itself. Transferring this complexity to works bursting with colour and layers that foreshadow today’s
Internet culture.

how to pronounce lopinavir Fallen Angel (1981) An electrifying painting, a portrait of an obsession, a self-portrait of a person whose career was cut short but who left behind a powerful and complex legacy, like the fallen angel who disobeys God and is
expelled from Heaven.

generic kaletra buy online Glenn (1984) From a period of intense creativity. Representing a monstrous, feverish, static, black head, resembling a mask radiating energy and emotion, against a background wall like in a kindergarten.

enter site In This Case (1983) One of Basquiat’s most famous works because of the way he combined complementary colours and contrasts between light and dark to create a rage-filled representation of himself.

Jean-Michel Basquiat was born in New York in 1960, the son of a respectable accountant and a prestigious graphic designer. Already in his youth, he came into contact with the great city’s subculture.

Basquiat quickly left behind his roots in conceptual graffiti to exhibit in art galleries. Famous at 20, he revolutionised the New York art world in the eighties. He reached international fame thanks to powerful and expressive works that addressed themes like racism, politics, and social hypocrisy. Although his career was cut short by his premature death at the age of 27, his work continues to have enormous influence.

Nothing feeds the soul like the best of music, art and food. A New Yorker by heart, scoping out all the awesomeness of this big ol' city.
Clarks Soho Syc Wally Launch Party w/ Raekwon- Sunday May 22nd ToastHampton Book Launch- Tuesday May 24th

Finish the Sentence: My salad must always have __