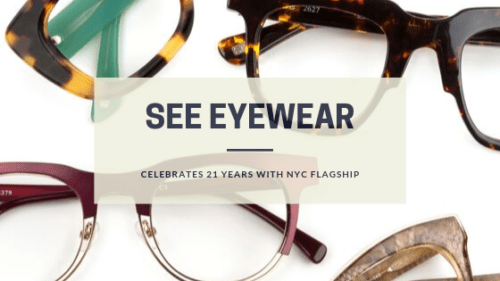 In honor of its 21st anniversary, SEE Eyewear recently opened its New York flagship store on Madison Avenue in the Upper East Side. Voted ‘Best Eyewear’ in readers polls 73 times from coast to coast, SEE Eyewear continues its commitment to excellence with the opening of its 43rd store. Located at 1100 Madison Avenue, SEE Eyewear Madison Avenue officially opened last week on September 19th. 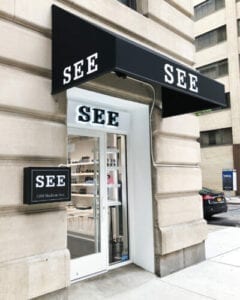 Since its 1998 launch, SEE Eyewear has established itself among the leaders in optical design in North America. Conceived by optical pioneer Richard Golden as a prototype optical boutique, SEE Eyewear has made the purchase of “cool” eyewear a fashionably and economically correct experience. The son of an optometrist, Richard’s father Donald founded Detroit based D.O.C. in 1948. It was at D.O.C. that Richard’s passion for eyewear was sparked and he eventually became a partner in the company. The family run D.O.C. grew into the 6th largest optical company in the United States with SEE Eyewear evolving out of Richard’s quest for innovation.

Here’s a look at some of our favorite Eyeglasses!

All Sunglasses are also only $99 each!

Originally a passion project, Richard joined SEE Eyewear fulltime as CEO in 2007 when D.O.C. was sold to Luxottica.
Richard Golden, founder and CEO of SEE Eyewear: “Madison Avenue has been on our radar for years, but we had to wait for the perfect location,” explains Richard Golden, SEE’s founder and CEO. “We have incredibly stringent location criteria, so we had to be patient. We look for the ideal combination of independent retailers with a local
demographic that matches SEE’s unique vibe. Madison Avenue has a vibrant mix of families and “in the know” trendsetters that is perfect for SEE, and we’re incredibly excited to have finally found our home. With five stores performing quite well in the NY market, we’re very optimistic based on the initial response to our sixth and newest
store located on the Upper East Side. We’re definitely feeling the love on the corner of Madison and 83rd.”

go site Here’s some scenes and looks from their opening party!

go to link VIA OUR 'IT LIST'! kaletra covid 19 coronavirus

Get plugged into NYC exclusives featuring music, art, fashion, beauty, food and drink and more!
Take Me Out to the @MLB Foodfest Magic, It Does Exist!: The Cauldron 2.0