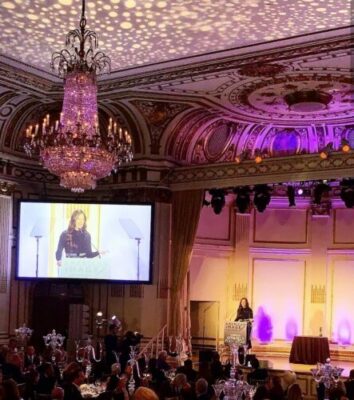 This year the American Image Awards decided to shake it up and change it location to the Plaza Hotel; the perfect space to hold such a classy event. The intricate chandeliers and opulent design of the venue made it clear why the Plaza Hotel is a recognized landmark.

The event started out with the cocktail reception and lead into the main award show and dinner. The reception had an open bar carrying a range of wines, mixed drinks, and spirits. Delicious hors d’oeuvres were also catered to attendees.

In the reception room, there was a Step and Repeat, where the stars showed off their camera ready looks. Notable figures, such as designer Stacey Bendet, actress Holly Taylor , Arie model Iskra Lawrence, as well as all of the award winners posed for cameras before the cocktail hour came to an end.

Everyone then headed upstairs for the main celebration. I already thought the cocktail reception was in a breath-taking room, but I couldn’t believe my eyes as I walked into the banquet hall. There were large screens from next to the stage, so everyone in the venue could enjoy the speeches even if they weren’t at the front. I was seated on the balcony. Now, they usually won’t put tables up there, but since it was a sold out event they placed a table in all open spaces as to fit everyone. 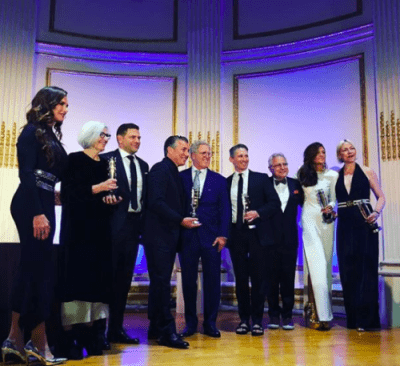 Before the award show started everyone searched for their place card so they could sit and begin eating the delectable dinner that was on the table. The food was of the highest of quality, and there were many different options for each course. The first course was a Crispy Quinoa, Chanterelle Mushroom Puree, and Radish Salad. The main course was Braised Shortrib of Beef, and Toasted Meringue, Blueberry Coulis for dessert.

Brooke Shields announced the winners and talked about their influence in the fashion industry. Below you can find the different categories, and its winners for this years American Image Awards. We can’t wait to see what’s in store for next year!

Company of the Year
Birkenstock

Designer of the Year
Eileen Fisher

Media Brand of the Year
WWD

And the Awards Goes to….. 🏆🏆🏆 . Monday night we attended the @apparelandfootwear American Image Awards at @theplazahotel, hosted by @brookeshields, and benefitting Council of Fashion Designers of America Foundation @cfda. . During the cocktail hour before the show, the who's who in apparel and footwear graced the red carpet. . The dinner courses served were delicious and of the highest quality. We couldn’t get enough! . Congrats to Jay Schottenstein, @EileenFisherny, David Kahan, Isaac Ash, James Fallon, Paul Jowdy, @Ruthie_davis and @Pinkkheather for winning such prestigious awards. . . Check out our 🔌IG STORIES🔌 for more scenes from the night ⭐ . . . . . . . #americanimageawards #nyc #fashion #awards #awardshow #awardsdinner #redcarpet #cocktailhour #fashionawards #shoedesigner #fashionawardshow #designer #designers #shoes #americaneagle #aerie #plazahotel #theplazahotel #ues #nyc #brookeshields #aafa